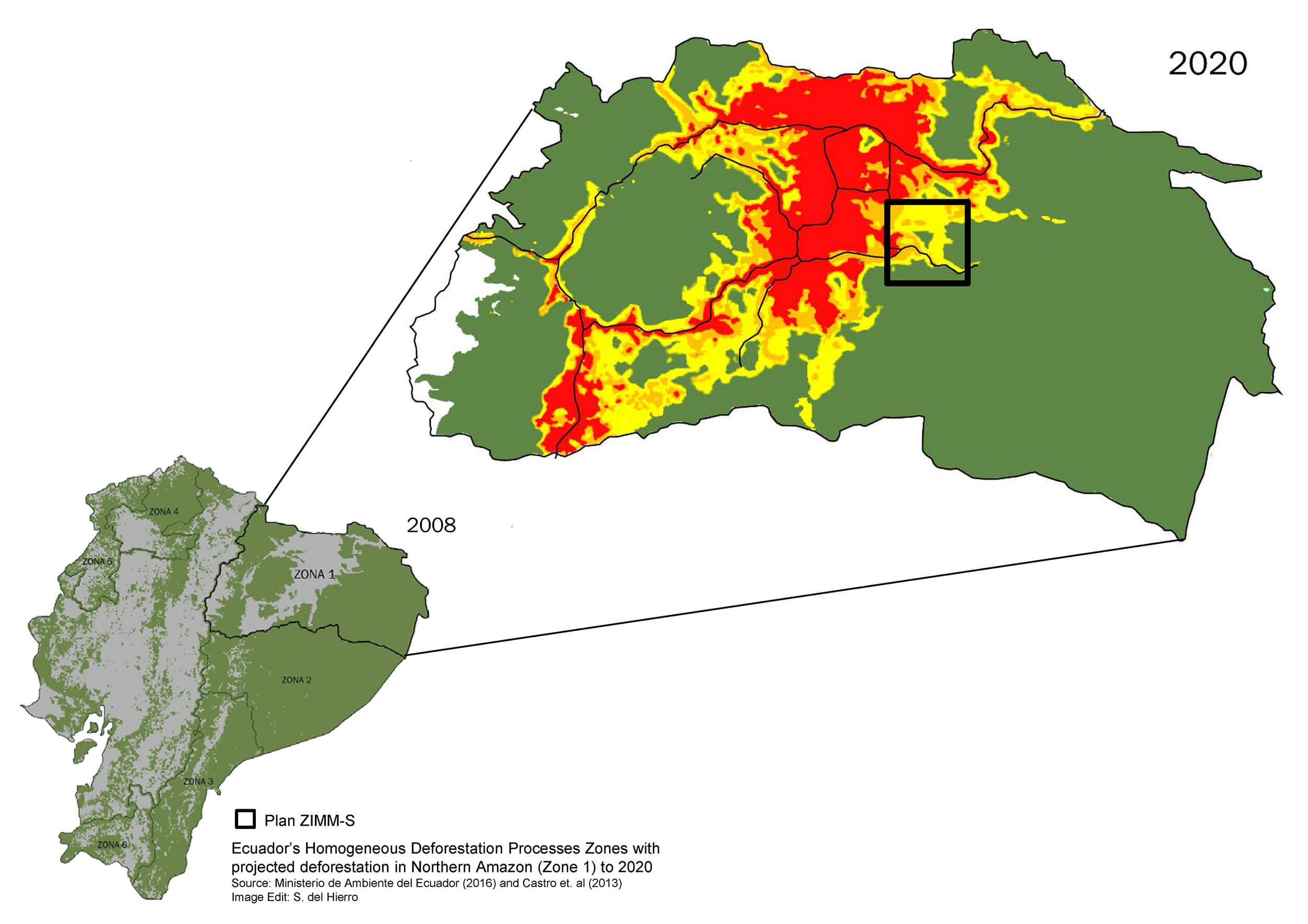 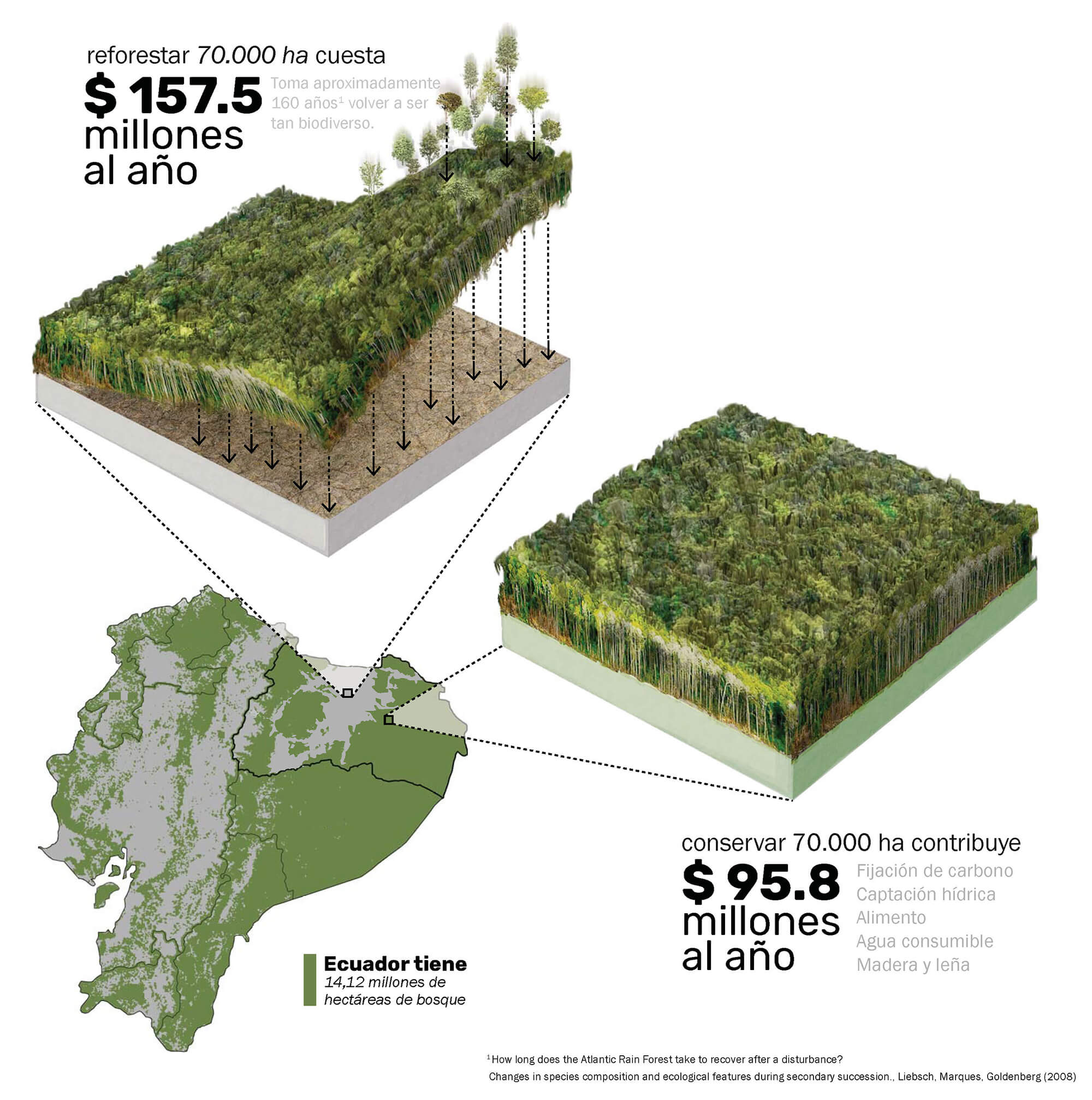 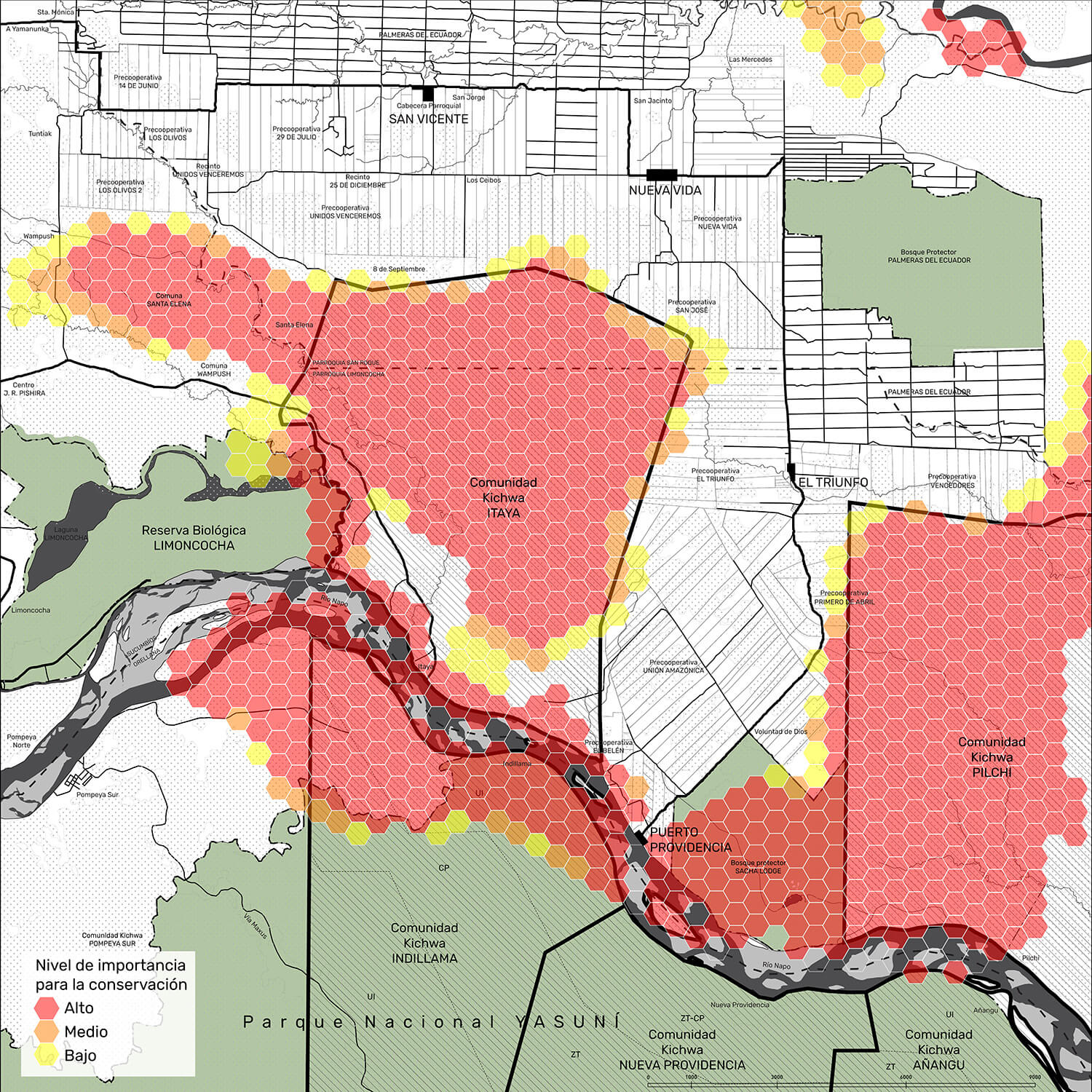 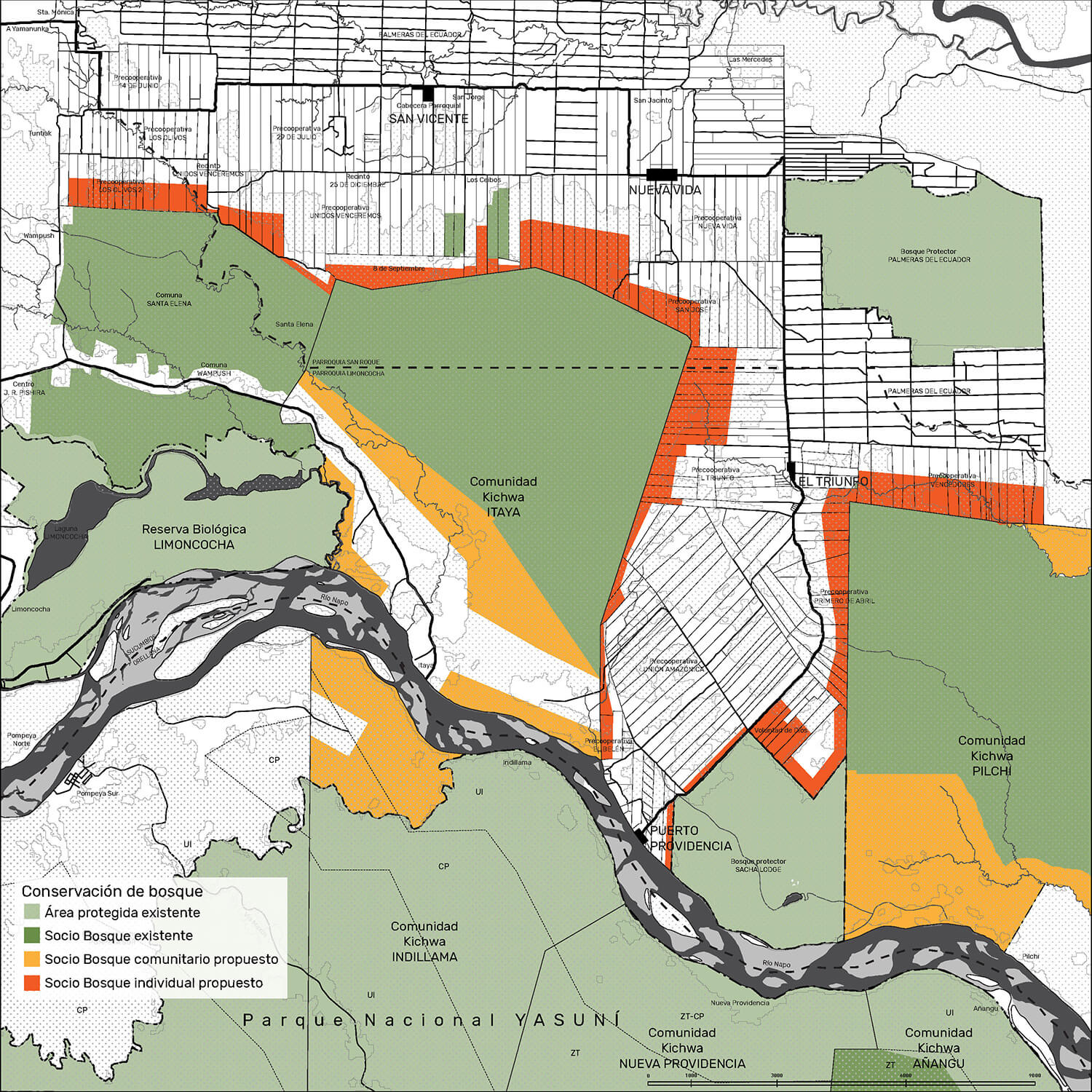 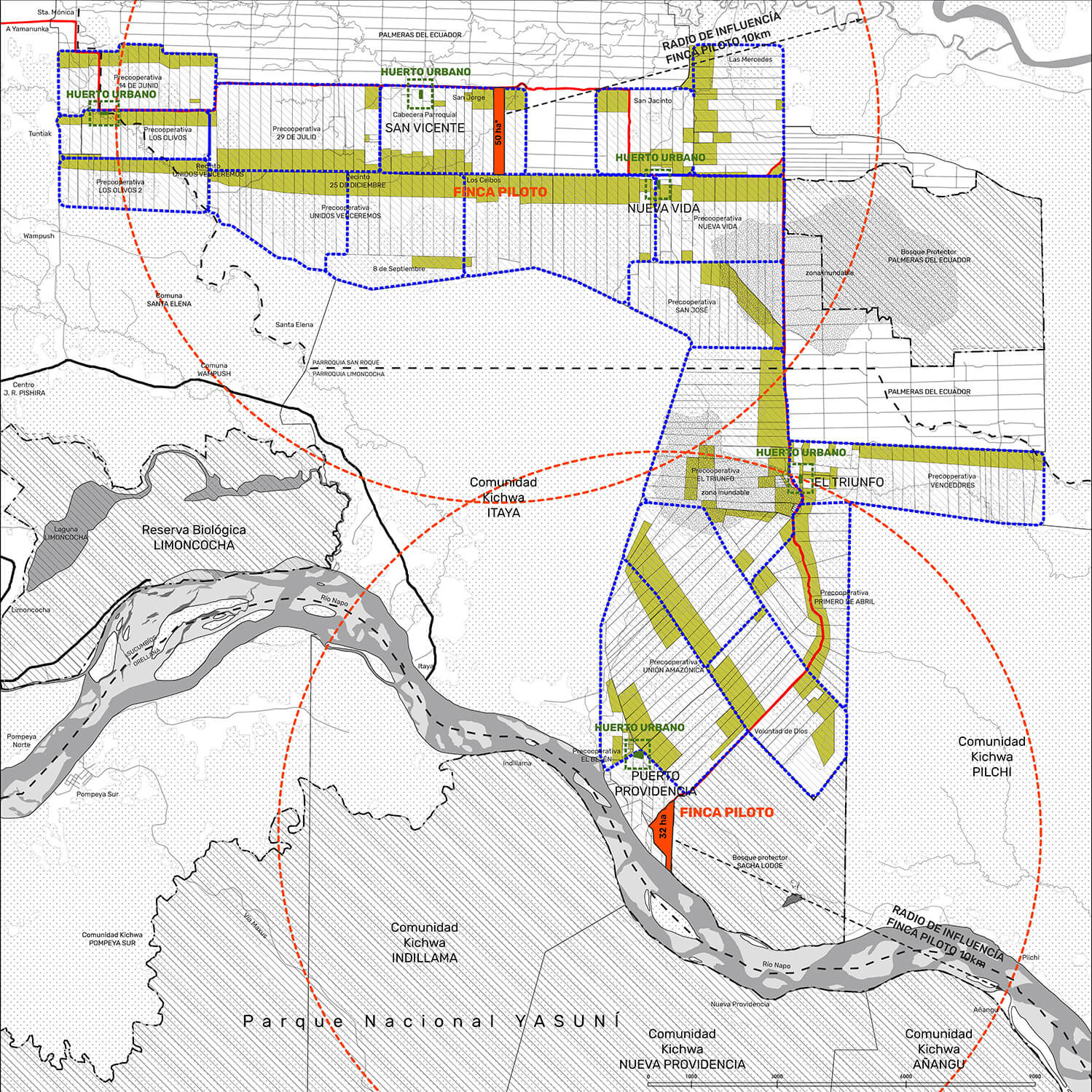 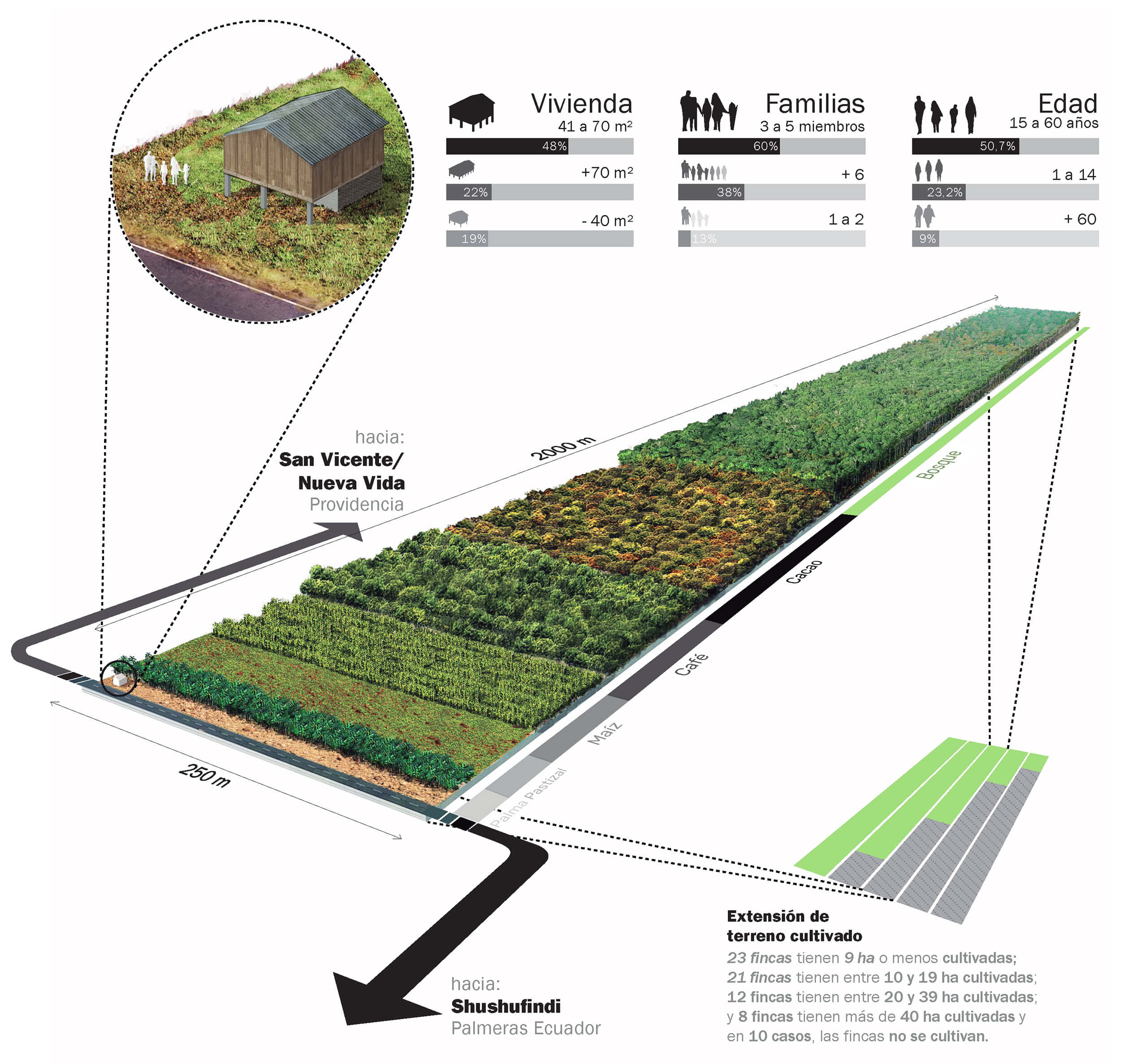 Perspective of a typical farm unit

Between 2000 and 2008, Ecuador’s northern Amazon region experienced a reduction in its deforestation rate. According to research from 20131, this was due to two factors: On the one hand, rural-urban migration tendency in the region favored denser human settlements and reduced pressure to generate new farmland that would have replaced forests. On the other hand, the more intensive and efficient use of agricultural land in some types of crops decreased the need to clear forest for new productive land. A third factor, according to The Nature Conservancy, was the consolidation of conservation areas (national parks and reserves) created in this region in the ‘80s and ‘90s. Although this was an encouraging time from an environmental perspective, the trend is changing and deforestation rates are rising, making space mainly for new grasslands, palm and cacao crops, due to the construction of new roads between 2008 and 2016 (90% of deforestation occurs less than 10 km away from a road).

Learning from deforestation trends in the Amazon, it is clear that the interrelationship between urban, agricultural and forested space can’t be overlooked in efforts to promote forest conservation strategies. The synergy between these three typologies of land use is interconnected and needs to be researched and approached in a multi-scalar and transversal manner. This is not usually what happens at the State level, where urban, agricultural and environmental public policies are designed separately, in a non-complementary way.

Reduction of deforestation is not only environmentally urgent: it’s also economically relevant. According to the Ministry of Environment (MAE)2, to recuperate a hectare of forest costs an average of US$ 2.250. If this number is multiplied by the approximately 70.000 hectares of yearly forest lost, it would cost the country US$ 157’500,000 to reforest that amount of land. On the other hand, MAE determined in 2014 that a hectare of protected forest represents approximately US$1.368,88 in environmental goods and services (including carbon fixation, hydric capture, sweet water supply, wood and food resources). Using the same 70,000 hectares as a comparison measure, the monetary value lost per year through deforestation is US$ 95’821,600. These are important numbers in a mid and long term economy for a country which has 57% of its land still covered by forests.

Plan ZIMM-S focuses on approximately 35,000 hectares of land in a part of the Amazon where agricultural expansion is already pressuring three important protected areas (Limoncocha, Yasuní and Cuyabeno) where Kichwa, Secoya, Cofán an Waorani indigenous communities live. Within this area, small towns are growing along a road built in 2014 to connect Manta with the Napo River (in order to complete the Manta-Manaos inter-oceanic corridor), and land-use change is rapidly taking place. As a case study, this region condenses many of the conflicts and contradictions that occur in all of Ecuador’s northern Amazon and presents an opportunity to address several layers simultaneously.

The Plan argues that using forest conservation funds to support farmers change the way they use their fincas (a standard 50 ha. unit from the colonization and agrarian reform of the ‘70s) can help create buffer zones that reduce pressure on indigenous territories and protected areas. At the same time, investment in programs for economically sustainable agro-ecological strategies in the “front end” of these fincas, towards the new road, can promote a more efficient and resilient use of agricultural land that connects small towns along the road with the recently built transfer port of Providencia, where small scale community industries can focus on value adding processes.