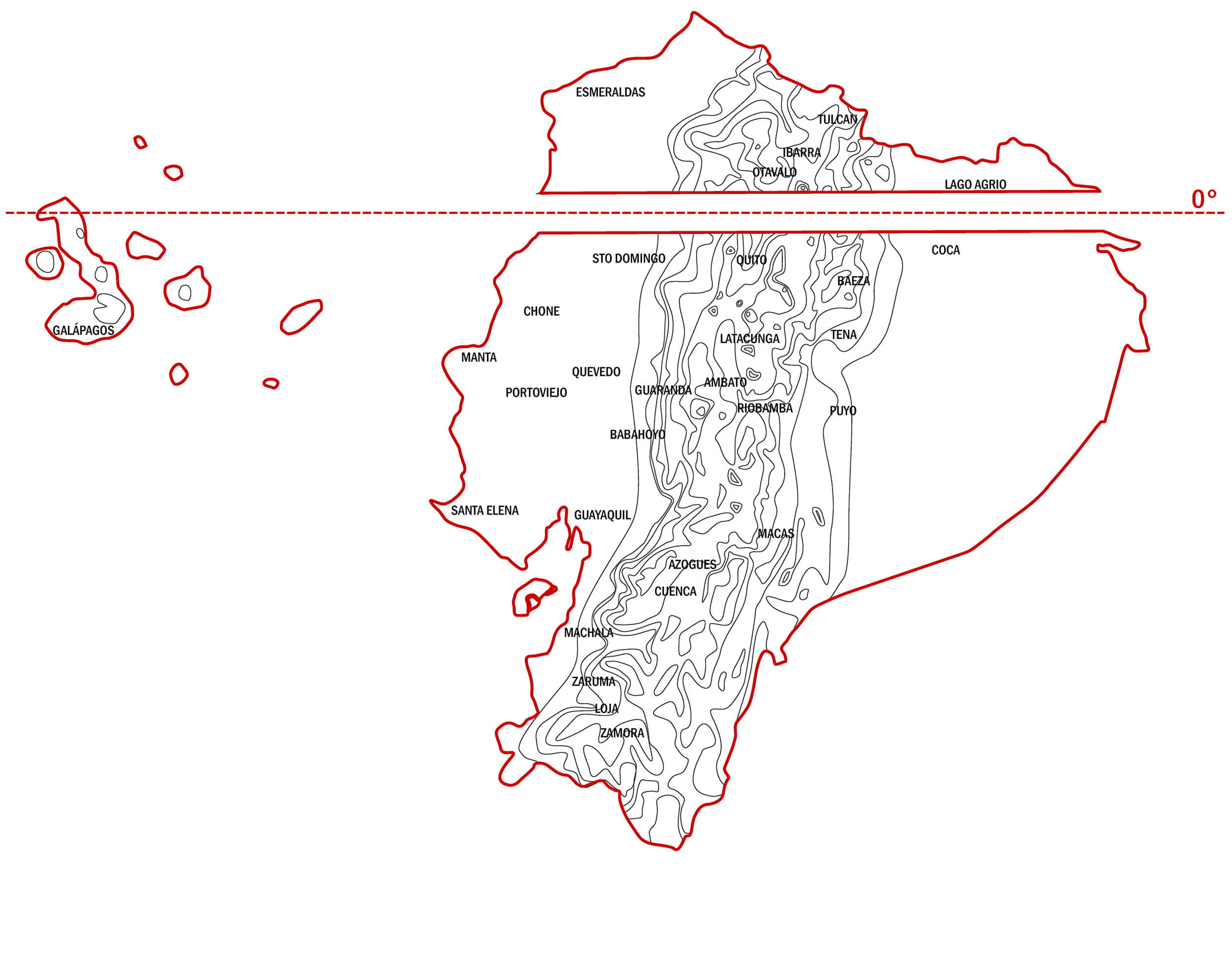 Map of Ecuador highlighting the Andes and the Equator 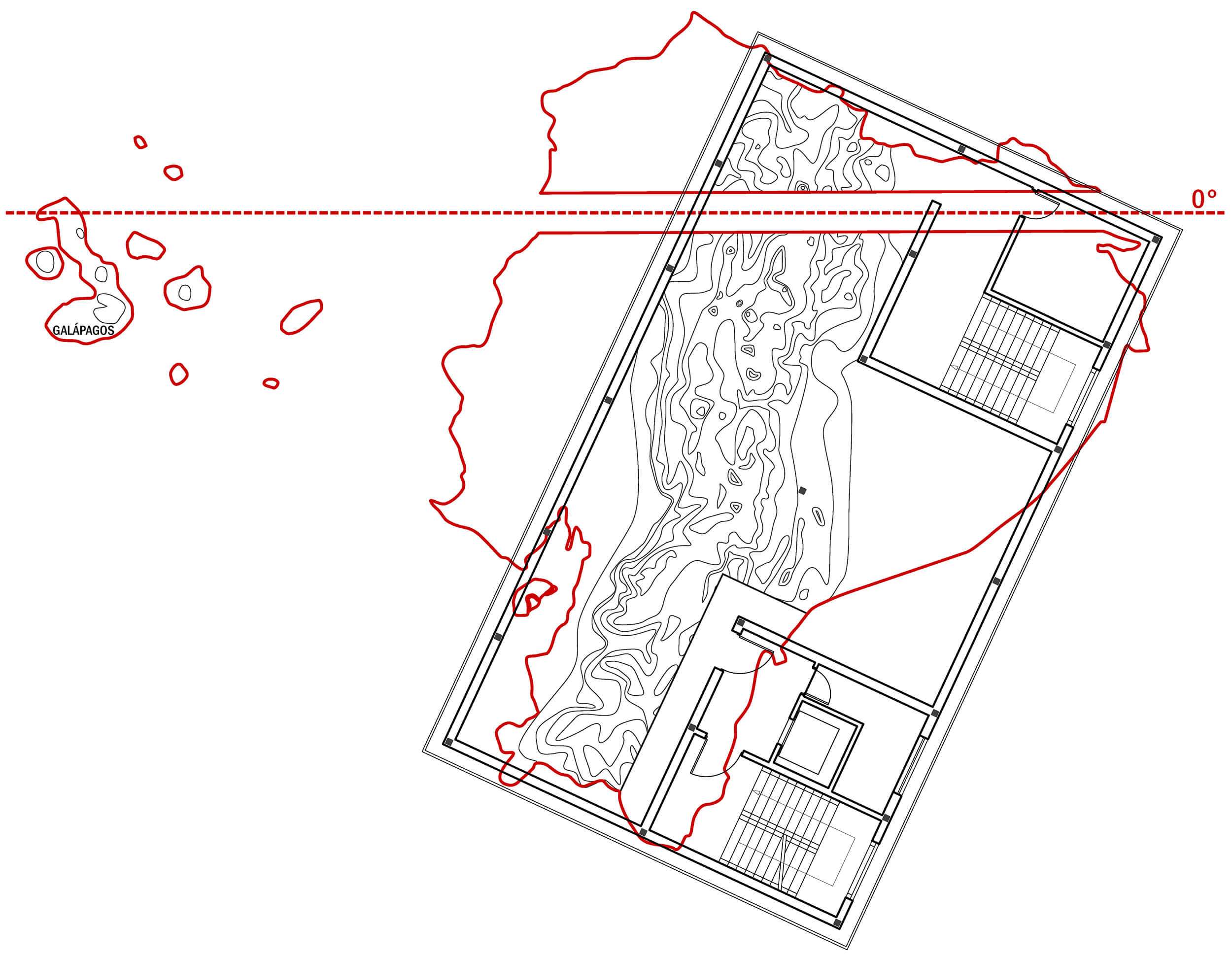 Intersection of the map of Ecuador with the Expo pavilion 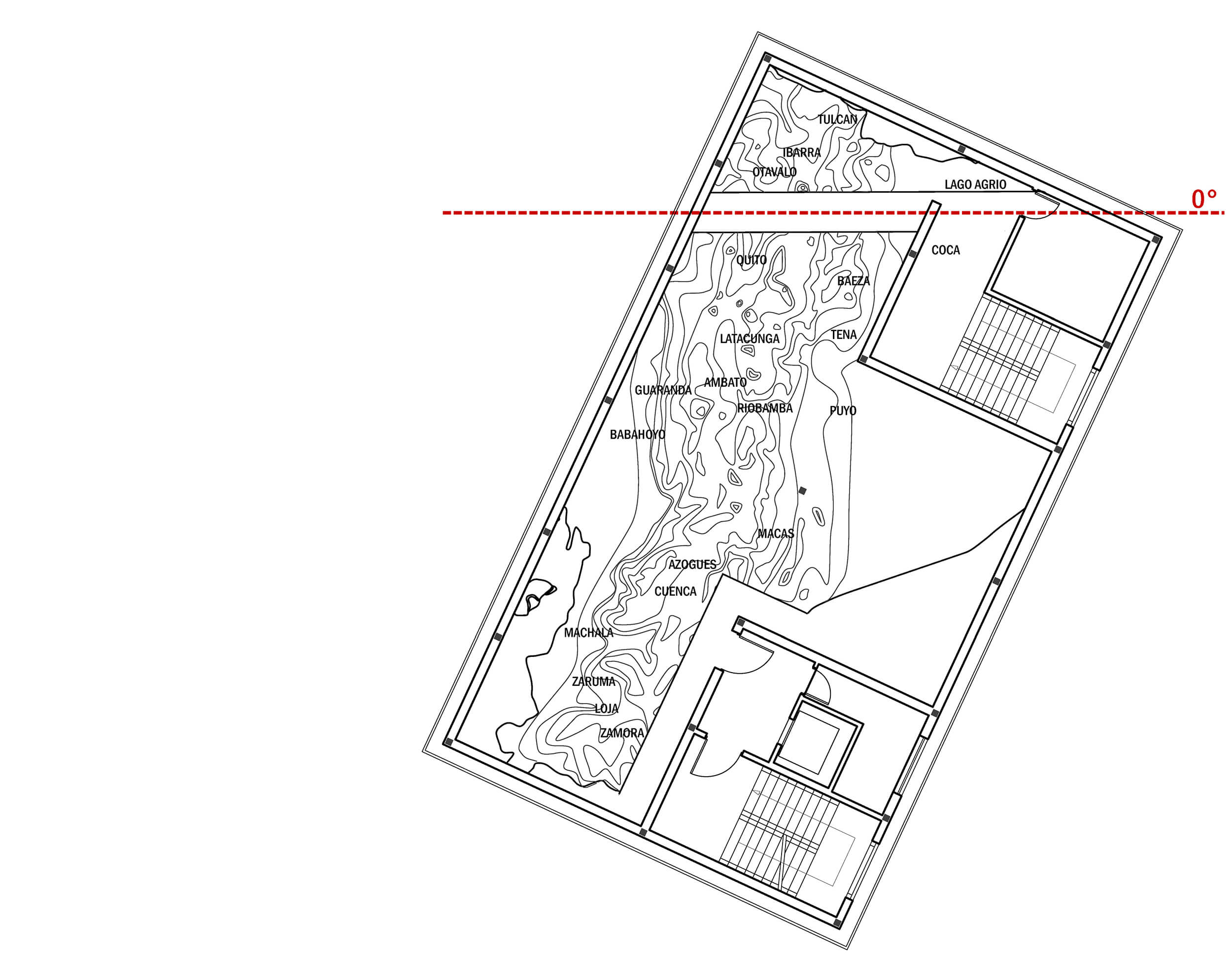 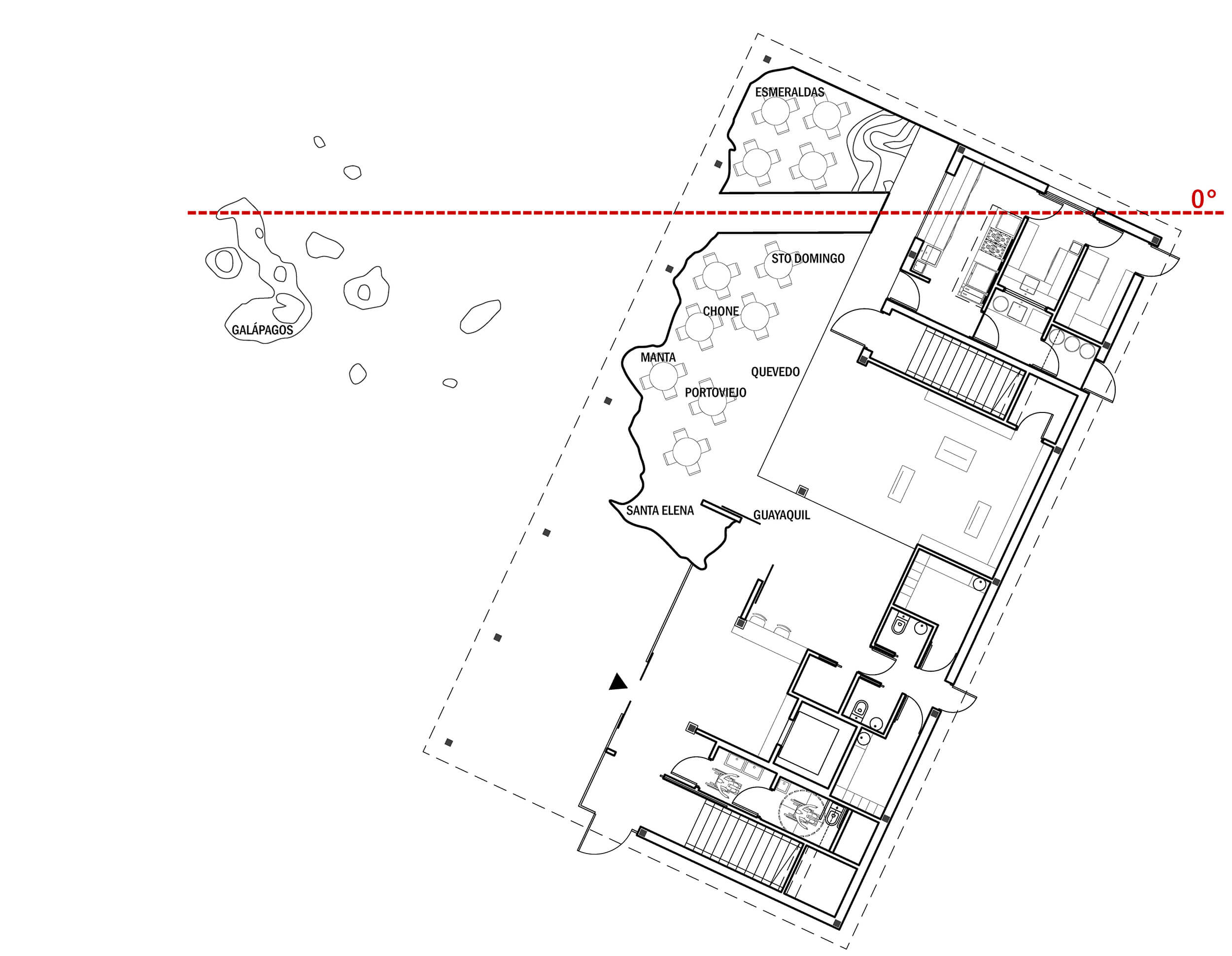 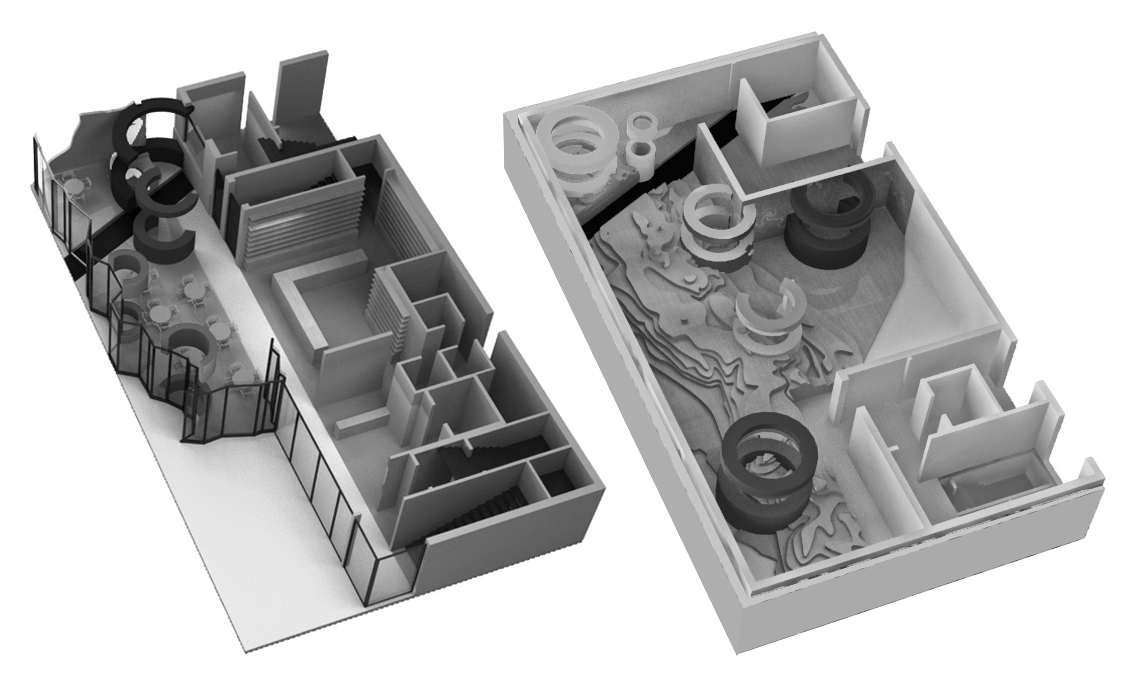 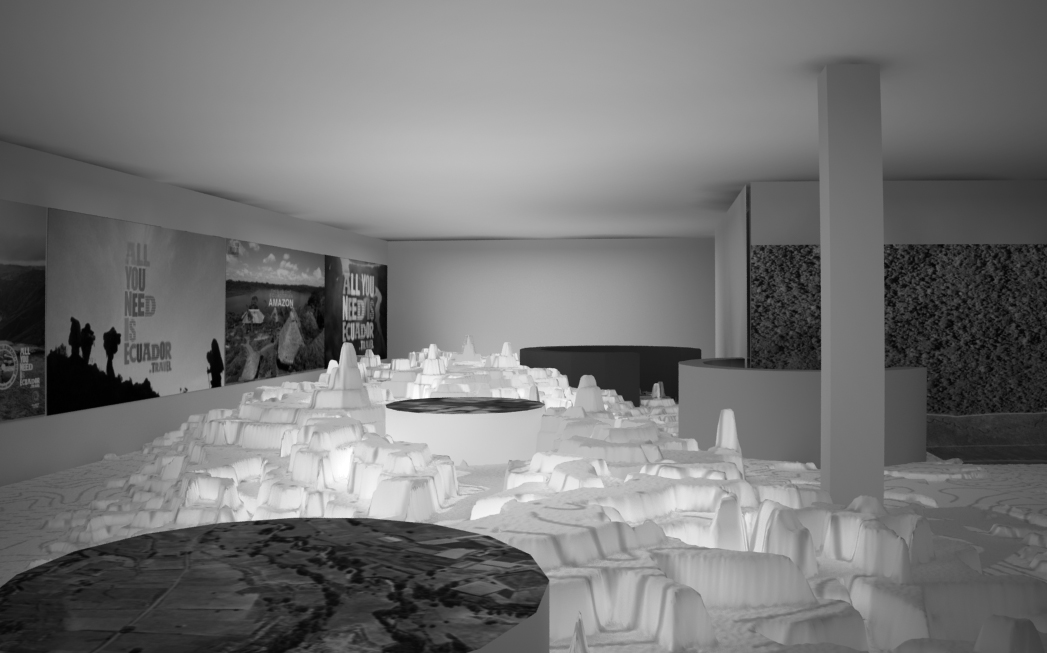 Conceptual model for the second floor

Ecuador is one of the 17 megadiverse countries of the world1. It is the smallest of them in size, but has the highest density of species in many groups of flora and fauna. It comprises, for example, more than 25,000 plant species (and thus twice the number of plant species found in Europe). In only 0.17% of the planet’s land area, it hosts 2794 mammal, bird, amphibian and reptile species, which represents 12% of all of the world’s vertebrates.2 The wealth of biodiversity in this region responds mainly to three factors: the climatic stability close to the equator that accelerates speciation, the variation of ecosystems due to altitude change in the Andes (ranging between 0 and 6,268 meters above sea level), and the encounter of two ocean currents (El Niño from the north and Humboldt from the south).3

In our proposal, agro-biodiversity, a sub-set of biodiversity, was established as the main topic for the exhibition inside Ecuador’s Pavilion at Milan’s Expo 2015, themed “Feeding the Planet, Energy for Life”. The aim of the project was to convey one idea and its global significance: Ecuador as the most biodiverse country per km2.4,5 This concept would connect with Ecuador’s efforts to move from a non-renewable resource economy to one based on bio-knowledge, which was an important part of the national discourse at the time.

The pavilion already had a fixed rectangular plan designed by Spanish firm Zorrozua & Asociados. Within the exhibition space, our proposal was to insert a giant interactive topographic model of Ecuador which would locate the Andes and Amazon on the second floor in order to literally experience variations in altitude, together with the crossing of a widened equator line. Visitors would be able to climb the Chimborazo or Cotopaxi volcanoes and then down to the Napo floodplains in the Amazon. This changing landscape would showcase several products of Ecuador’s mega agro-biodiversity and explain the importance of preserving and understanding its importance for the future through scientific exploration in combination with ancestral knowledge. On the ground floor, a façade of Ecuador’s coastline would enclose the cafeteria where people would be able to taste regional cuisine. The equator line also had a strong presence at this level, extending all the way to an outdoor sculpture of the Galapagos Islands.

Both floors would be connected by a staircase with graphics developed in collaboration with designer Belén Mena. These depicted the ecosystems of the Andes-Equator crossing and products from Ecuador. In addition to well-known ones like banana, cacao, coffee, shrimp and roses, it was important to introduce a sample of less known products like achira, amaranth, babaco, bijao, cedron, chamburo, chonta, garabato yuyo, granadilla, guanabana, guayusa, ishpingo, machitona, naranjilla, nigua, paso, patas, pitahaya, sacha inchi, tamarillo…